Hola! Welcome to my little page on the internet! I hope to document the progress (that I also hope) I will make on getting my Amiga 2000 back into tip top shape.

First, a little history about me, my interest in the Amiga, and of this particular A2000. Back in the deep, dark past of the 1980s I was a young boy who really, really liked computers. My primary (read: elementary) school had suggested to my parents that they investin a home computer to let me pursue my interest, and for the Christmas of 85, they bought me an Amstrad CPC464, with an amber screen. I loved it. I poured over Usborne BASIC books and wrote my own little games (most rude little three or four line text adventures) and used it as the control centre of my home fort (made out of one of those 80s foam sofabeds that everyone seemed to have back then.

But this isn't a story about the little 8-bit that could, it is about the Amiga. And so we fast forward to 1987 and to slightly older (but still single digit aged me) being captivated by an Amiga display in a department store. I must have spent hours just watching the demos and videos they had on rotation. I am sure my parents really appreciated it as it meant they could get on with their real shopping.

Well, one day, as I was standing transfixed by the demos, my dad tapped me on the shoulder and told me it was time to go home. My heart sank. I just wanted to stay and watch. But then he gestured to the box on the ground next to me, which was for an Australian spec Amiga 500 Starter Kit. He had apparently convinced my mother that we should get it, as that particular pack came with a Commodore branded colour TV that doubled as the monitor, so we would all get something out of it!

That machine was wonderful, it came with an extra 512kb RAM expansion board in the trapdoor hidey hole, had Workbench and Kickstart 1.2 and opened the door to Deluxe Paint, Protracker/OctaMED, C and Asssembly programming and so many, many games (Speedball 2, I love you the most!).

Over the years I thumped out school assignments, animated mini movies, made terrible, terrible music (think of Twenty 4 Seven only, and I know this sounds impossible, worse). That machine got swapped out for an A500+ with 2MB of RAM after a trip to the UK and that A500+ got a 20MB sidecar HDD, a real stereo connected to it (I used to listen to MODs rather than CDs, I was that kid) and was carted from friend's house to friend's house for epic sessions of Lotus II and Sensible Soccer. This machine was then subsumed by a CD-32 because I thought that 32-bit was the future of gaming. I was right but also so, so, so wrong.

But then I got a PC.

I could lie and say Wolf3D, but really, it was Solitaire (really, I was addicted) and the business software packages that I was starting to use at school. The fact that this (weirdly, another Amstrad) computer could play Wolf3D was a solid bonus. It was upgraded over time to play Ultima VII and Doom (though it could only manage that in a postage stamp sized window). And then it was replaced by a a 75Mhz Pentium which I really only used to play Mechwarrior 2 on). And then I was off to Univerisity.

I would still pull out the A500+ or the CD-32 from time to time, but by then everyone had PlayStations and gaming PCs but I missed really using the Amiga for what it was good for - music and animation. It was whilst I was out with some Uni buddies that we came across a little computer store that had a section dedicated to used/classic computers, and on that shelf was a pristine A2000 for only a couple of hundred dollars. I slapped down my debit card and struggled to carry the big box machine back to my tiny hatchback to take home.

That machine (this machine I am working on at the moment) became a bit of a project and came with a number of extra cards and bits that needed fitting. It had a flicker-fixer video enhancer, it had a Kickstart switcher to allow switching between 1.3 and 2.04, it had a SCSI card with a bunch of extra RAM and a 40MB HDD out of an Apple Mac. I put it all together, hooked it up to a 15" VGA monitor and set to work using it for my creative endevours. I even sourced a Sony SCSI CD-ROM so I could pull in files from my CD-32 - though that never worked as well as I wanted.

The A2000 sat proudly next to my PCs for a few years, and only got put away when I startd getting serious with my girlfriend and we decided to move in together. It got packed away, and I had to try and forget about it for a couple of years. That relationship didn't last too long so when I was a single bloke around town, I pulled the A2000 back out of mothballs and put it back on display next to my (for that time) pretty serious gaming rig.

And then I moved house. And it went back into storage and was only brought out for a couple of retro gaming nights. And it hadn't been out of that cupboard for pretty much the last decade. Until this week.

So, after all of this personal story that really only pads the word count on this page, why did I pull it out now? And what do I intend to do with it? Well, I pulled it out as the room it was hiding in has a new occupant moving in soon, and I intend to fix it up, maybe accelerate it a little, and put it back on display where it can be used for what it was meant for.

So far, all I have done is clean it, pull the slightly leaky battery out of it, remove the Sony CD-ROM so I could keep the front of it all one uniform shade of beighe, and powered it up and tested it. Next I will need to find a suitable monitor for it (either one of my old ones that needs fixing up, or sourcing an appropriate multi-use screen from somwhere). I hope to document a lot of that here, and I hope to build out this Neocities page to be a bit more Amiga appropriate. 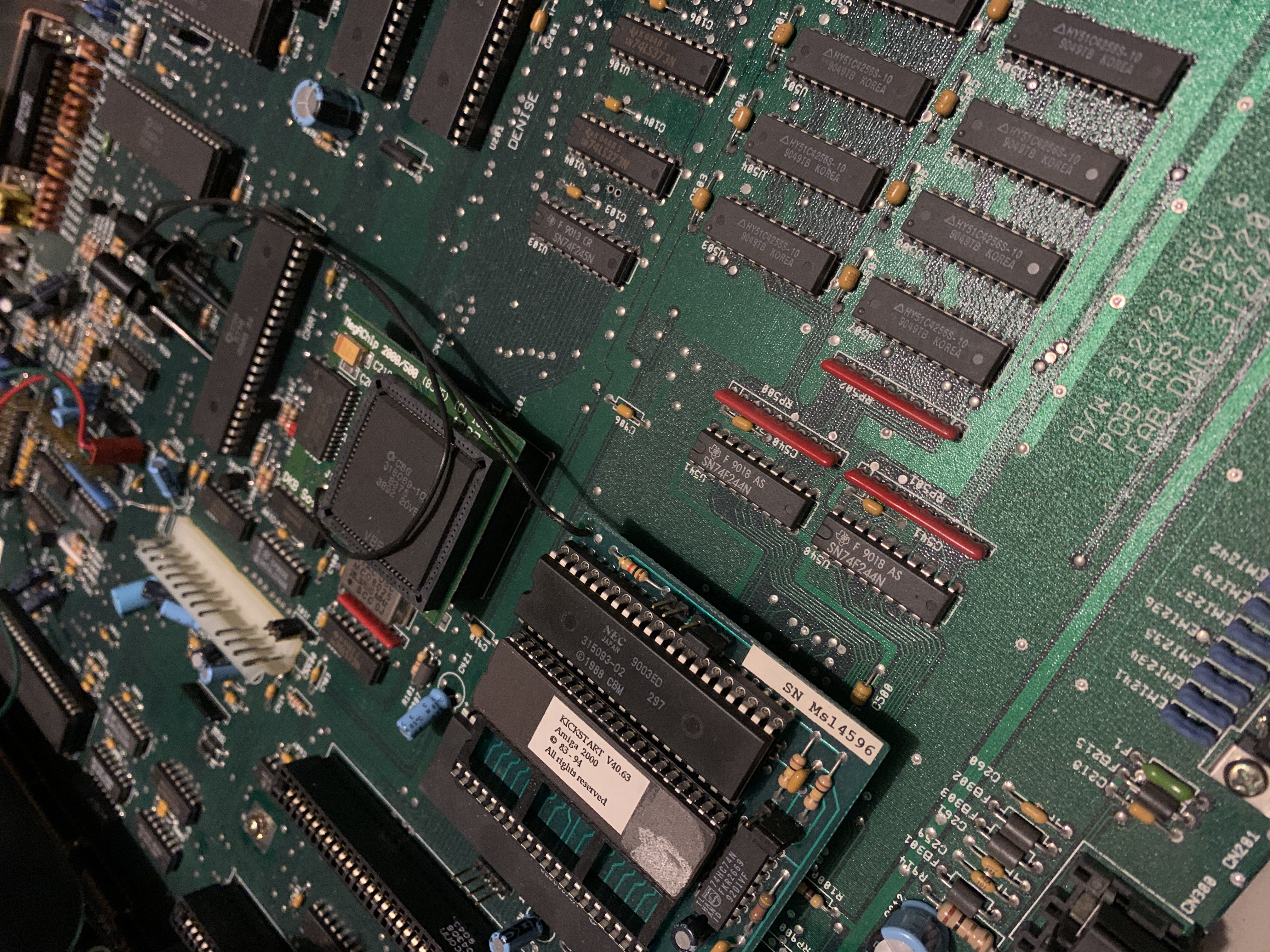